A purse frozen in time was found during school renovations. Inside were family photos, diary entries and a calendar opened to April 1959 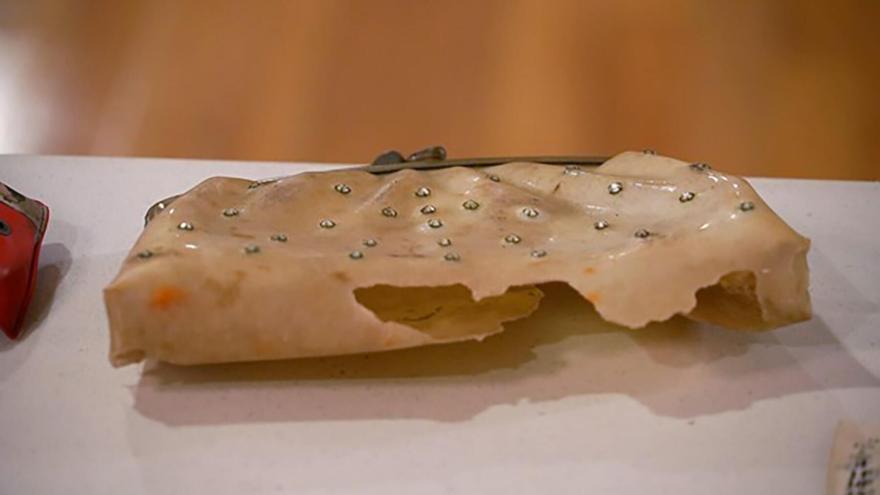 The plastic clutch was found with a few holes that were chewed out by a rodent, according to the school district.

(CNN) -- Renovations at a Texas school led to an unexpected discovery of an accessory frozen in time.

Beneath the floorboards of a stage at a League City school, around 26 miles southeast of Houston, contractors found a small, plastic clutch filled with items that once belonged to a 13-year-old.

Sydney Hunt, a senior communications specialist with the Clear Creek Independent School District, told CNN the purse was still intact, aside from a few holes that were chewed out from a rodent.

"Everything we pulled out added to her story," Hunt told CNN. "It was like piecing together a puzzle." Family photos, a floral handkerchief and a calendar opened to April 1959 were among the items inside.

Handwritten notes, like diary entries, were also found in the clutch, Hunt said. One note read, in part, "The next night at the teen club we started going steady" -- most likely a reference to the owner's crush, according to Hunt.

"It was an accurate representation of what a teenager was like during that time," Hunt said, "It was kind of like a time capsule."

Built in 1938, the school housed many students over the years. Contractors found the purse last summer when renovations were being done to convert the old school into a community center.

The city has kept the purse and its contents while deciding what to do with it.

This month, city officials partnered up with Clear Creek district and the League City Historical Society to solve the mystery of the purse's owner.

There was one very helpful clue: Written on some of content in the bag was the name Beverly Williams.

There were also photos with the names of Williams' family listed on the back and even a note that read, "Beverly has my permission to ride this bus. She will stay with Sandra tonight," signed by a Mrs. Frank Williams, Jr..

"It was like looking at today's Facebook," Richard Lewis, Vice President of the League City Historical Society, told CNN.

But when the school district ran the name through yearbooks, they had no luck finding a Beverly Williams, Lewis said. School and city records were also unable to locate Williams.

They eventually realized Beverly was the teen's middle name -- her first name was Andrea. This gave the historical society exactly what it needed to run her name through ancestry databases.

Lewis said they discovered Williams had passed away in 2015 but was survived by her husband and nine children.

He began making calls to family members but was met with voicemails and disconnected numbers. Local TV stations also aired the story in hopes of finding the family.

Eventually he got in touch with Deborah Hicks, one of Williams' nine children.

Hicks told CNN that she received the call on October 5, two days before what would have been Williams' 77th birthday.

"We were stunned," Hicks said. "It was great to see how outgoing she was as a teen. She went to dances, had a lot of friends."

Williams was an artist, Hicks said, describing her mother as a fun-loving woman who always made time for her children and grandchildren.

On Wednesday, Hicks alongside two of her sisters -- Andrea and Rhonda -- were able to view the items at the new community center.

"It was interesting to see how much mom could stuff in that little bag," Hicks said. "It was funny to see how she was at 13 was how she would be later in life with nine children."

The items were officially returned to Williams' family, but they have allowed the city to keep the items on display at the community center.