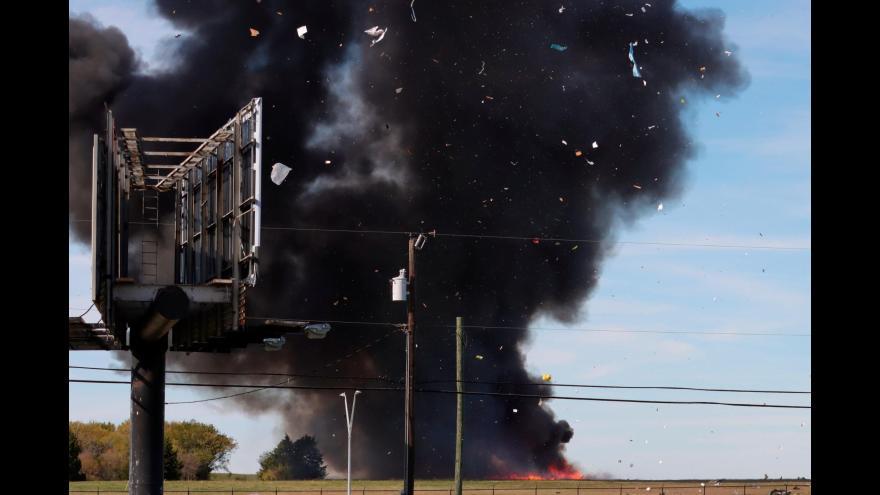 Dan Ragan is another victim of the tragic crash at the Dallas air show.

"We can confirm that there are six (fatalities)," a spokesperson for the office told CNN in a phone call.

More than 40 fire rescue units responded to the scene after the two vintage planes -- a Boeing B-17 Flying Fortress and a Bell P-63 Kingcobra -- went down during the Wings Over Dallas airshow.

In video footage of the crash described by Dallas' mayor as "heartbreaking," the planes are seen breaking apart midair after the collision, then hitting the ground within seconds before bursting into flames.

Here are the latest developments as investigators from the National Transportation Safety Board begin their investigation:

What we know about the crew members killed

The crash took place at around 1:20 p.m. Saturday, the Federal Aviation Administration said.

Terry Barker and Len Root were crew on the B-17 Flying Fortress during the airshow, the APA said on social media.

"Our hearts go out to their families, friends, and colleagues past and present," the union said. The APA is offering professional counseling services at their headquarters in Fort Worth following the incident.

The death of Barker was also announced by Keller Mayor Armin Mizani on Sunday morning in a Facebook post.

"Keller is grieving as we have come to learn that husband, father, Army veteran, and former Keller City Councilman Terry Barker was one of the victims of the tragic crash at the Dallas Air Show," Mizani wrote.

"Terry Barker was beloved by many. He was a friend and someone whose guidance I often sought. Even after retiring from serving on the City Council and flying for American Airlines, his love for community was unmistakable."

A 30-year plus veteran of the Civil Air Patrol's Ohio Wing, Maj. Curtis J. Rowe, was also among those killed in the collision, Col. Pete Bowden, the agency's commander, said Sunday.

Rowe served in several positions throughout his tenure with the Civil Air Patrol, from safety officer to operations officer, and most recently, he was the Ohio Wing maintenance officer, Bowden said. Rowe's family was notified of his death Saturday evening, the commander added.

"I reach to find solace in that when great aviators like Curt perish, they do so doing what they loved. Curt touched the lives of thousands of his fellow CAP members, especially the cadets who he flew during orientation flights or taught at Flight Academies and for that, we should be forever grateful," Bowden wrote in a Facebook post.

"To a great aviator, colleague, and Auxiliary Airman, farewell," he said.

In a Saturday news conference, Hank Coates, president and CEO of the Commemorative Air Force, an organization which preserves and maintains vintage military aircraft, told reporters the B-17 "normally has a crew of four to five. That was what was on the aircraft," while the P-63 is a "single-piloted fighter type aircraft."

Three more victims were identified in a release from the Commemorative Air Force, which hosted the event.

"We are heartbroken to announce that the following members of the Commemorative Air Force went west on Saturday," the statement said, using the phrase pilots use when one of their own has died.

Craig Hutain was a United Airlines pilot and executive officer with Tora! Tora! Tora! Airshows. In a bio on the company website, Hutain wrote he started flying with his father at 10 years old. He took his first solo flight at 17, became a flight instructor in college at Cal Poly San Luis Obispo, where he graduated with a Bachelor of Science degree in aeronautical engineering, and got a job with an airline in 1982. He was married, with two daughters and four grandchildren.

Kevin "K5" Michels and Dan Ragan were named as the other victims. CNN is working to obtain more information about Michels and Ragan.

The Commemorative Air Force identified both aircraft as based in Houston.

No spectators or others on the ground were reported injured, although the debris field from the collision includes the Dallas Executive Airport grounds, Highway 67 and a nearby strip mall.

The B-17 was part of the collection of the Commemorative Air Force, nicknamed "Texas Raiders," and had been kept in a hangar in Conroe, Texas, near Houston.

It was one of about 45 complete examples of the model, only nine of which were airworthy.

The P-63 was even rarer. Some 14 examples are known to survive, four of which in the US were airworthy, including one owned by the Commemorative Air Force.

The FAA was leading the investigation Saturday, but the NTSB took over the investigation once its team reached the scene, the agency said at a news conference Sunday. The team dispatched by the NTSB consists of technical experts who are regularly sent to plane crash sites to investigate the collision, according to the NTSB.

The NTSB has received the air show common frequency recording, which is the verbal radio transmissions between pilots, and it will be processed by an investigative specialist, NTSB Member Michael Graham said in an update Monday.

Neither aircraft was equipped with a flight data recorder or cockpit voice recorder, often known as the "black box," Graham said.

"However, we recovered this morning the electronic flight display from the B-17 and a GPS navigational unit from the P-63," he said in an update Monday.

The units from the two aircraft were damaged during the accident, according to Graham, and are being sent to the NTSB recorder lab in Washington, D.C., to determine "whether data and relevant information can be recovered from both units."

"The NTSB's recorder lab specializes in recovering data from electronic devices and avionics and the data often assist in determining the probable cause," Graham said.

Data that these types of units "may have," according to Graham, would be things like GPS location, possible altitudes of the aircraft, and the airspeeds of the aircraft.

Investigators surveyed the accident site using both an NTSB drone and a photograph of the scene from the ground to document the area before the wreckage is moved to a secure location, Graham said earlier.

"We have recovered the wreckage of the P-63 as of this morning, and it has been transported to a secure location and it'll be laid out for examination and analysis," Graham said. "Rain has delayed further recovery of the B-17. The recovery process will continue tomorrow, weather permitting."

Graham asked anyone with photos or videos of the incident to share them with the NTSB.

"They'll be very critical to analyze the collision and also tie that in with the aircraft control recordings to determine why the two aircraft collided and to determine, basically, the how and why this accident happened and then eventually, hopefully, maybe make some safety recommendations to prevent it from happening in the future," he said.

According to Coates, the individuals flying the aircraft in his group's airshows are volunteers and follow a strict training process. Many of them are airline pilots, retired airline pilots or retired military pilots.

"The maneuvers that they (the aircraft) were going through were not dynamic at all," Coates noted. "It was what we call 'Bombers on Parade."

"This is not about the aircraft. It's just not," Coates said. "I can tell you the aircraft are great aircraft. They're safe. They're very well-maintained. The pilots are very well-trained. So it's difficult for me to talk about it because I know all these people. These are family, and they're good friends."

While neither aircraft did not have a flight data recorder or a cockpit voice recorder, and "nor are they required to," Graham said the NTSB would be looking "down the road" at whether it is something that needs to be recommended.

"We also must remember these are very vintage, old 1940's aircraft. So that'd be something that we'll look at as a possible recommendation down the road, but I have nothing further on that to say if that is what it would be," he added.

A preliminary accident report is expected in four to six weeks, but a full report on the investigation may not arrive for 12 to 18 months.

The Wings Over Dallas event, which was scheduled to run through Sunday, was canceled, according to the organizer's website.