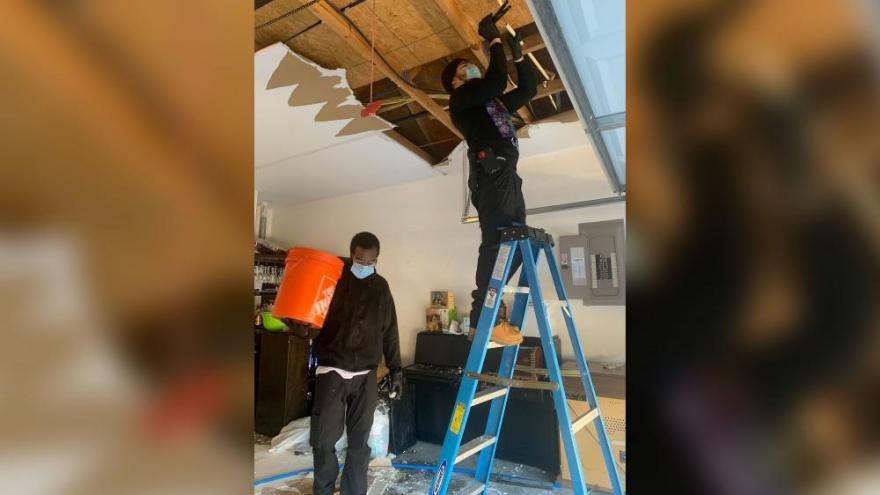 Andrew Mitchell, right, and Isaiah Pinnock work in a customer's home in Texas.

(CNN) -- A New Jersey plumber who wanted to help Texans dealing with burst pipes and other damage after last week's winter storms drove to Houston with a truck full of tools and got to work.

Andrew Mitchell and his wife, Kisha Pinnock, decided to make the 22-hour drive from Morristown with their 2-year-old son Blake after hearing that local plumbers were overwhelmed with calls and that some customers couldn't get help for weeks. Isaiah Pinnock, who is Kisha's brother and Mitchell's apprentice, went with them.

Before leaving New Jersey, they bought as many plumbing supplies as they could afford, Pinnock said -- because those items are currently hard to find in Texas.

The group arrived in Houston, Texas on Sunday afternoon. Pinnock's sister, who lives in Houston, connected them with several people who had been looking to hire plumbers. They quickly enlisted the services of Mitchell's Plumbing & Heating.

"By the time we got here there was already about four or five jobs lined up from my sister, and we just hit those first, and then everything after that has really just been referrals from like the initial customers, as their friends and family," Pinnock, who is a lawyer, said. "Since we've been here, it has really been nonstop."

Pinnock said that her husband and brother had done about 13 jobs since they arrived and that they have full days scheduled for Wednesday and Thursday.

Among those customers was Dedrick Dock, of Spring, Texas. He told CNN that he'd tried to get at least 15 plumbers out to his house before he heard about Mitchell's Plumbing & Heating on social media from a friend's neighbor.

Dock and his family had been staying with relatives for more than a week because of a broken pipe in the garage.

"We had to relocate for over a week because we needed to get someone out there," he said. "And of course, with the plumbers here they were already overwhelmed with the work that was going on."

The group had planned to return home next week, but now said they will stay for about two weeks because they've gotten so many calls from people who need their help.

"I think that we made a difference, for sure," Pinnock said.