A Memphis shooting rampage -- part of which was livestreamed -- leaves 4 people dead and 3 wounded, and a suspect is in custody 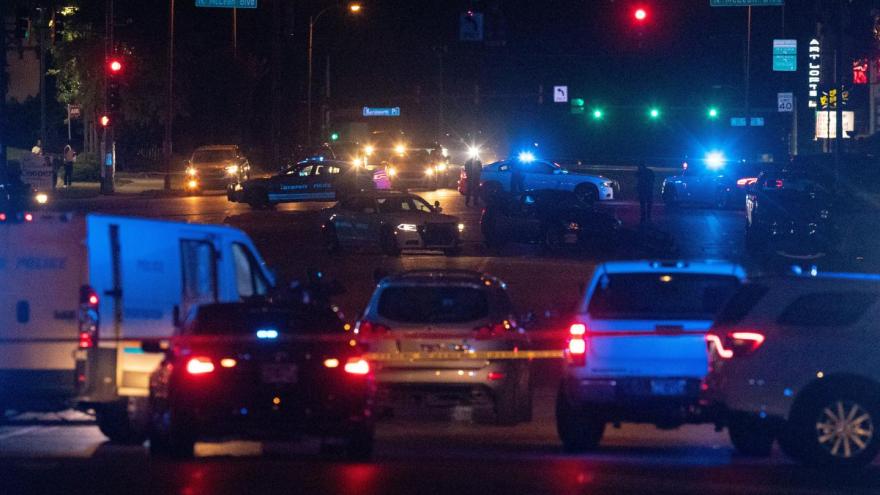 Memphis police officers work the scene of a shooting MPD believes was committed by a man driving around shooting on September 7.

(CNN) -- A 19-year-old man was arrested Wednesday after livestreaming part of a shooting rampage that left four people dead and three others injured and upended life throughout Memphis as residents were urged to shelter in place, police said.

The hours-long rampage led to the suspension of public bus and trolley service and cut short a minor league baseball game. It left the city's mayor enraged over the wanton violence and came less than a week after the high-profile kidnapping and killing of a school teacher who was out jogging.

"I am angry for them, and I'm angry for our citizens who had to shelter in place for their own safety until this suspect was caught. This is no way for us to live and it is not acceptable," said Memphis Mayor Jim Strickland, who offered his condolences to the victims' families.

"The people of our city were confronted with the type of violence no one should have to face."

At least one of the shootings was apparently streamed on Facebook Live -- which ultimately led to the arrest of Ezekiel Kelly following a high-speed pursuit, Memphis Police Chief Cerelyn "C.J." Davis said at a news conference early Thursday.

Kelly was released from prison in March after serving 11 months of a three-year sentence for aggravated assault. He pleaded guilty to the lesser charge after originally facing counts that included attempted murder, reckless endangerment and using a firearm with intent to commit a dangerous felony in a 2020 case in Shelby County, court records show.

"If Mr. Kelly served his full three-year sentence, he would still be in prison today, and four of our fellow citizens would still be alive," Strickland said.

Kelly, who is also known as Zeek Huncho, is to appear in court on Friday, according to jail records. He's being held on a first-degree murder charge though officials said they anticipate additional felony charges.

The shooting spree began before 1 a.m. Wednesday and continued through the late evening hours, triggering a shelter-in-place order for part of the city as police searched for the gunman.

"Our citizens in Memphis and Shelby County were going about their business ... getting off from work, picking up children from daycare, just going about their ordinary lives, when it was all of a sudden shattered," Shelby County Sheriff Floyd Bonner said. "Many families will never, ever get over the horrific violence that we saw, that one individual inflicted on the city tonight."

How the shootings unfolded

The first shooting was reported around 12:56 a.m. in the 3100 block of Lyndale Avenue. Officers found a male victim in a driveway and he was pronounced dead at the scene, Davis said.

Three witnesses at the scene -- friends of the victim and suspected shooter -- positively identified Kelly from a photographic line up, according to an arrest affidavit.

The victim was identified as Dewayne Tunstall, who was with four other friends when Kelly pulled him aside, according to the affidavit. Tunstall was shot in the head.

At 4:38 p.m., officers responded to another shooting in the 900 block of South Parkway East, where they found a man in his vehicle with multiple gunshot wounds. He was pronounced dead at the scene.

Video surveillance from a nearby business captured the gunman pulling up next to the victim in a grey sedan and firing multiple shots before driving away, Davis said.

Minutes later, at 4:40 p.m., officers responded to a shooting at Norris Road and I-240, where a woman had a gunshot wound to the leg. She was taken to a hospital in non-critical condition. The suspect fled in a dark colored sedan, Davis said.

More than an hour later, at 5:59 p.m., officers arrived at the scene of another shooting at a store the 4000 block of Jackson Avenue. "Ezekiel Kelly was on Facebook Live when he opened fire inside the store," Davis said.

Responding officers found a male with a gunshot wound. He was taken to a hospital in critical condition.

A short time later, at 6:12 p.m., police received a call that someone named "Zeek Huncho" was live on Facebook saying he was "threatening to cause harm to citizens," Davis said.

The Memphis Police Department then launched a citywide search for an "armed and dangerous" suspect, urging some residents to shelter in place.

At 7:23 p.m., another shooting was reported in the area of Poplar Avenue and North Evergreen, where a woman had been shot and killed. The gunman fled the scene with the victim's vehicle, a gray SUV, Davis said.

A minute later, officers again responded to a shooting on Poplar Avenue and found a man who had been shot. He was taken to a hospital in non-critical condition, Davis said.

Then, at 8:55 p.m., officers responded to the 800 block of West Raines Road where a woman with gunshot wounds was pronounced dead, according to Davis. She was the seventh shooting victim of the spree.

At 8:56 p.m., the Southaven, Mississippi, police department responded to the area of Stateline Road and Highway 51, regarding a carjacking, Davis said. Police said Kelly carjacked a victim at gunpoint, taking a gray Dodge Challenger, leaving behind the gray SUV. The victim was uninjured. Southhaven is just across the state line from Memphis.

Two minutes later, at 8:58 p.m., Memphis police spotted the Challenger on I-55 and Kelly was taken into custody without incident after a high-speed chase.

The chief said two weapons were visible in the vehicle when Kelly was apprehended. "Numerous felony charges are pending," she added.

The social media giant said it was in touch with the department shortly after police made their initial public alerts and have since removed video content that may be related to the incident.

'We have to stop this madness'

The string of shootings disrupted life in the city Wednesday as police issued alerts about their search for the suspect. The Memphis Area Transit Authority suspended its bus and trolley services, citing danger from the active shooter.

AutoZone Park in downtown Memphis was evacuated during a minor league baseball game hosted by the Redbirds, WMC-TV reported. The suspended second game of a doubleheader was to resume late Thursday afternoon, according to the team's website.

The shooting spree came on the same day that the man suspected of abducting and killing Memphis teacher Eliza "Liza" Fletcher was temporarily ordered held without bond on a murder charge that was added after her body was identified.

Fletcher's disappearance sparked an intense hunt -- buoyed by surveillance video that police said showed her being forced into an SUV while she was on a jog -- that led to Henderson's arrest near his Memphis home Saturday.

Fletcher's body was found near a vacant duplex Monday, and was publicly identified Tuesday, authorities said.

The teacher's violent death reverberated around the Tennessee city, which was again shaken by Wednesday's shootings.

"We have to stop this madness. We are pointing fingers ... My question to everybody, before you point that finger, ask yourself, what are you doing?" community activist Stevie Moore told CNN affiliate WMC TV Wednesday night.