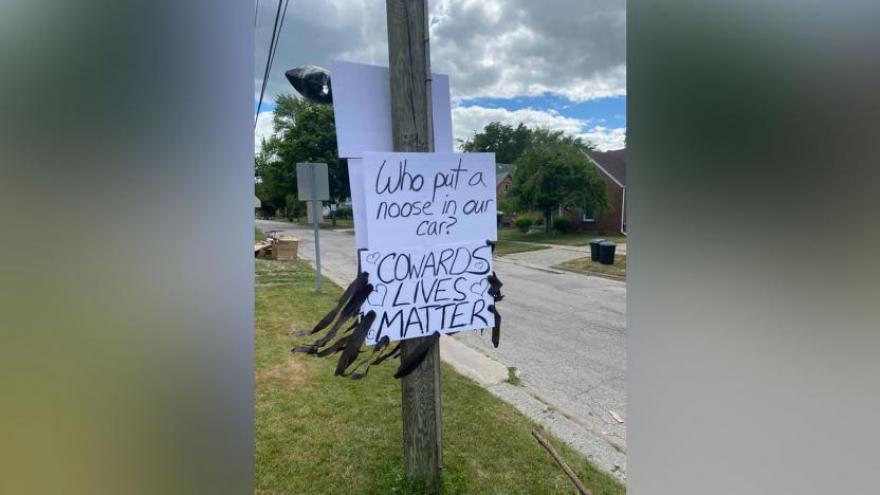 After finding the noose, the Simons put up signs outside their Saginaw home.

(CNN) -- In the aftermath of George Floyd's killing, several nooses were left around Saginaw, Michigan. Nearly two years later, a man is facing federal hate crime charges for it, the Justice Department says.

Kenneth David Pilon, 61, was charged this week with six counts of interfering with federally protected activities, a misdemeanor hate crime, court documents show. If convicted, each count carries a punishment that varies from a fine or imprisonment of up to one year, or both.

As nationwide protests against police brutality took place after Floyd was killed by a Minneapolis police officer, Pilon allegedly tried to stop people from supporting Black Lives Matter during multiple incidents in the span of nearly five weeks.

CNN has reached out to Pilon and an attorney representing him for comment. He has not yet been arraigned, and is not currently in police custody, Special Agent Mara R. Schneider of the FBI Detroit division told CNN.

During one of those calls Pilon told an employee: "I'm gonna go out and lynch me a n***er," the court document said.

A couple days before the incident, Starbucks reversed its position that had prohibited employees from wearing paraphernalia, such as T-shirts or pins, supporting the "Black Lives Matter" movement and announced it was giving 250,000 T-shirts to employees.

Pilon "made these communications for the purpose of issuing a threat and with knowledge that the communications would be viewed as a threat," authorities said in an affidavit.

According to the affidavit, later that week, Pilon went to a Goodwill store and left a noose along with a note that read, "An accessory to be worn with your 'BLM' t-shirt. Happy protesting!"

Authorities said at least four other nooses and notes were found at multiple locations, including a Walmart parking lot, inside a beverage cooler at a 7-Eleven store, a Kroger parking lot and inside a private vehicle.

In the United States, the hangman's noose has come to symbolize brutality and the country's history of lynchings and hatred toward Black people.

In recent years, nooses have been found hanging outside the National Museum of African-American History and Culture in Washington, on college campuses and on a fence at an Oakland, California, elementary school.

Donald Simon found one of the nooses on the morning of July 12, 2020, when he got into his truck outside his Saginaw home. He was planning to drive to a nearby gas station and get coffee there, but he never made it.

When he opened the truck's door, Simon's ex-wife Regina told CNN he spotted the noose and a note inside the vehicle, and went back inside their home.

"It took us to our knees, I think we just kind of went numb and went to autopilot," said Regina Simon, adding that her husband eventually felt so much anger.

"Our truck is about, not even 10 feet from my front door. That bothered me -- you came on my property and brought hate to a house that does not hate," she said.

Regina Simon, who is Mexican and White, and her ex-husband, who is Black, said they think they were targeted because the family had been playing on their front yard with their dog a day before the incident. Regina Simon had been wearing a Black Lives Matter T-shirt, they said.

In the days that followed, Regina Simon said she posted a photo of the noose on Facebook, spoke with the NAACP, decorated her front yard with Black Lives Matter signs and balloons, and organized a protest because the family wanted to show they were not scared or intimidated.

Regina Simon said the family didn't know Pilon and never had contact with him. They hope, if Pilon is found guilty, a judge orders Pilon to do mental health therapy.

"Anybody that lives a life full of hate like this, that's got to be a miserable life," she said, referring to Pilon.