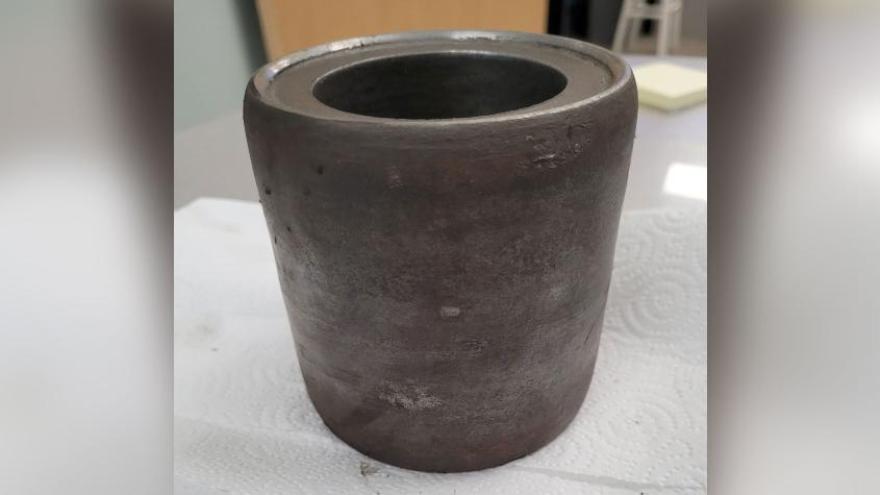 Authorities are working to determine where an object that crashed to the ground near the Maine State Capitol on August 15 came from.

(CNN) -- Maine Capitol Police screener Craig Donahue was returning from his lunch break when he heard a "loud thud" and the sound of metal rolling.

Lucky for Donahue, he narrowly missed being hit Friday afternoon by a large "sleeve-like object" that likely fell from a plane near the Maine State House.

"It probably would have left a pretty good mark," Donahue said Tuesday morning on CNN's "New Day." "It was maybe 7 to 8 pounds falling from the sky, unannounced, and it would have been a pretty good wake-up call."

The cylinder was about 7 inches by 5 inches with grease all over it, according to Donahue, and he wasn't the only one who saw its dismount from the sky.

Two other people saw the object fall around 12:30 p.m. near the capitol building in Augusta, according to a Maine Department of Public Safety news release. No injuries were reported.

The object "landed at a high velocity, approximately 6 to 8 feet" from Donahue, he said.

When he picked it up, he thought: "Holy Cow, this thing is heavy," he said on "New Day."

He took the cylinder inside and reported the incident to the Augusta State Airport and the Federal Aviation Administration, he said.

The Maine Department of Public Safety said in a news release that the FAA is "attempting to locate the source of the part which is likely from a large airliner on an international route."

In a statement to CNN on Tuesday morning, an FAA spokesperson said, "The FAA is aware of the report and is investigating."

Correction: An earlier version of this story gave the wrong day for when the object fell out of a plane. It was Friday.