A Kentucky toddler dressed up as the Queen. A few months later she received royal mail 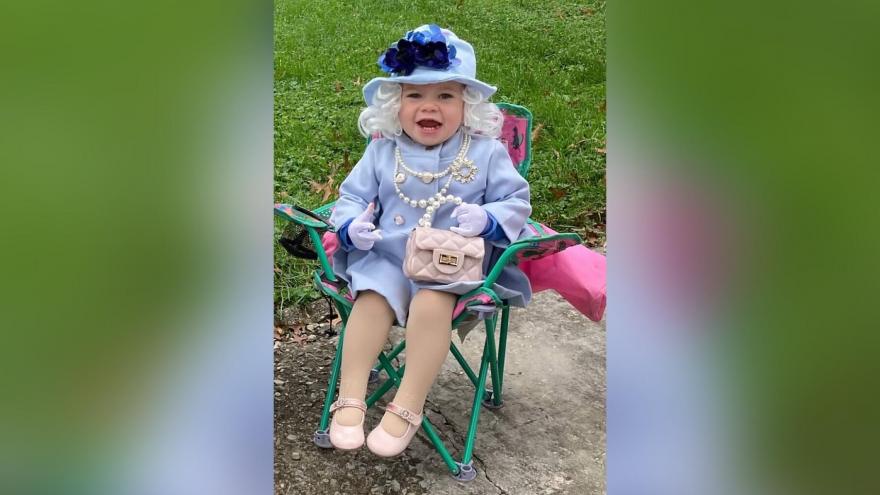 To resemble the Queen, Jalayne Sutherland wore pearls, a wig and a matching jacket and hat set.

(CNN) -- One Kentucky family recently got a piece of royal mail in their mailbox, sent straight from Windsor Castle.

When Katelyn Sutherland checked the mail on December 27, she wasn't expecting to find a letter addressed to her daughter, Jalayne, with a royal stamp on it.

"It was mixed in with our other mail," Katelyn said, "I had to calm myself down and make sure not to rip the envelope."

The excitement came from a royal idea the family had back on Halloween. Two-year-old Jalayne dressed head-to-toe in gear to resemble Queen Elizabeth II for her Halloween costume.

From a matching light blue jacket and hat set, to a white wig and pearls, Jalayne looked just like Her Majesty.

And the outfit was complete with the family corgis, Rascal and Jack.

The letter read, "Her Majesty thought it kind of you to write to her, and The Queen was pleased to see the photograph of your daughter, Jalayne, in her splendid outfit."

It was signed by the lady-in-waiting, Mary Morrison, who is a female personal assistant to a court.

Since Jalayne is so young, Katelyn tried to help her understand the importance of the letter a little better. She put the hat on her that they used for the costume and the two danced around the kitchen in excitement.

The inspiration for the costume came from the toddler's bond with the pups, Katelyn says.

"Ever since Jalayne was born the two corgis have been best friends with her," Katelyn said, "Especially since she started eating and sneaking them food, they loved her even more."

Because of that connection, they wanted to include Rascal and Jack into the costume somehow. "When you think of corgis you most certainly think of the Queen," Katelyn said.

Katelyn posted photos to Facebook to show the comparison, and friends encouraged her to share them with the Queen.

She eventually decided to print out the picture and send it in a letter across the pond the first week of November.

Katelyn says this was around the time the Queen wasn't feeling well, so she hoped this letter would cheer her up.

She wasn't even sure the Queen would even see the note, and knew it would take awhile to get from Florence, Kentucky, to England.

The Sutherland's plan to frame the letter and put it on display in their living room for the time being, until Jalayne is older to keep the letter herself.

As for next year's outfit, "I'm never going to be able to top this!" Katelyn noted.