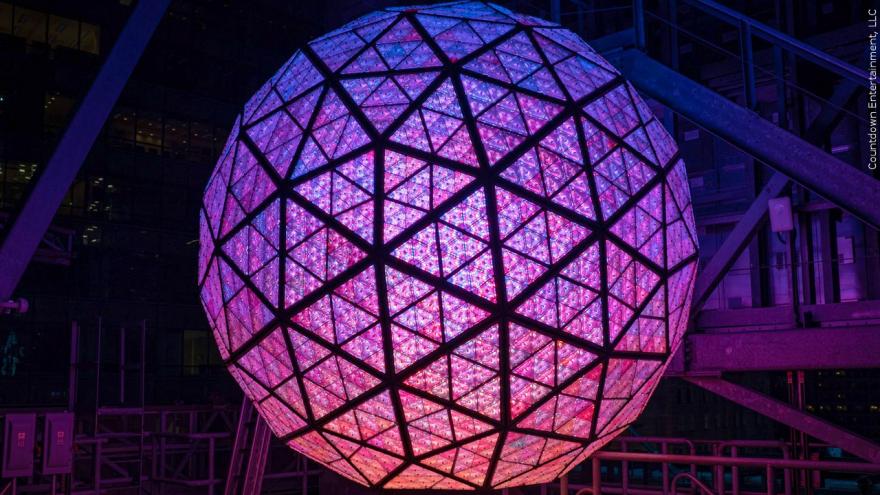 (CNN) -- On the last day of each year, it has become a ritual for large crowds to gather in the brightly lit chaos of New York's Times Square to ring in new beginnings. At 11:59 p.m. a dazzling ball descends down a pole, while attendees -- and millions of people tuning in from home -- count down from 60. At the stroke of midnight, the crowd erupts into a cacophony of sound, often pulling their loved one in for a ceremonial kiss.

This year, although New Year's Eve celebrations are being scaled back due to the spread of the Omicron variant, the Times Square ball will drop. Organizers are, however, encouraging people to tune in to watch it virtually, and in-person attendance will be capped at 15,000 (reduced from 60,000 pre-pandemic).

Last year marked the first year since 1904 that crowds were prohibited from flocking to Times Square. Though the ball drop was canceled for two years during World War II, people still came to observe the tradition and hold a minute of silence.

Over the past century, the symbol of the New Year -- the luminous ball -- has evolved from a iron and wood cage adorned with light bulbs to a dazzling technicolor crystal object.

But how did this New Year's Eve celebration start, and why do we commemorate the occasion by watching a ball descend down a pole?

The Times Square ball began thanks to a Ukranian immigrant and metalworker, named Jacob Starr, and the former New York Times publisher, Adolph Ochs. The latter had successfully drawn crowds to the newspaper's new skyscraper home in Times Square through pyrotechnics and fireworks to celebrate the forthcoming year, but city officials banned explosives from being used after just a few years.

The new concept was based on time balls, nautical devices that had gained popularity in the 19th century. As time-telling became more precise, ship navigators needed a standardized way to set their chronometers. Each day, harbors and observatories would raise and lower a metal ball at the same time to allow sailors to synchronize their instruments.

Both Ochs and the New York Times' chief electrician, Walter Palmer, have been credited with the idea, allegedly inspired by the downtown Western Union Building, which dropped a time ball each day at noon. But Starr's granddaughter Tama, who joined Artkraft Strauss in 1982 and now owns the business, said in a phone interview that she believes it was her grandfather who came up with the concept of the ball being lowered and lit up with the new year numerals at midnight.

"The idea was to ... have it illuminated with the brand-new electricity that had just come up to the neighborhood," said Tama, who for many years served as foreperson at the Times Square ball drop. "And it was lowered by hand ... starting at one minute to midnight, and that was the way it was done for many years."

"It was an adaptation of an old, useful thing," she added. "It was instantly popular. People just loved it."

Though Manhattan had been partially illuminated by electricity since the early 1880s, the US National Park Service (NPS) notes that half of American homes were still lit by gas lights and candles until the 1920s. The sight of a glimmering ball lowering down from the dark skies would have seemed otherworldly.

When the ball reached the parapet with a sign displaying the numbers of the year, "the electrician would throw the switch, turning off the ball and turning on the numbers at the same time," Tama said. "So it looked like the ball coming down transformed into the set of numbers."

All of Times Square got in on the theatrics. In the first year, waiters in nearby restaurants and hotels wore battery-powered "1908" top hats that they illuminated at the stroke of midnight.

'A minute outside of time'

There have been seven different Times Square balls since its first descent, from a 700-pound iron structure fitted with 25-watt light bulbs, to a lighter aluminum frame after World War II, to a "Big Apple" during the administration of the city's former mayor Ed Koch.

In 1995, when the ball got a glitzy update with rhinestones, strobe lights and computer controls, traditional signmakers were no longer needed -- which meant that Artkraft Strauss, the company that had brought the ball to Times Square, was no longer needed either. Today's ball is a collaboration between Waterford Crystal and Philips Lighting, using 32,256 LEDs that can be programed to display millions of colors and patterns on its surface.

Nonetheless, Tama remembers her years on the roof of One Times Square fondly. She took turns with her brother supervising and playing timekeeper. When the last minute of the year arrived, the workers lowered the ball down using a complex pulley system.

Using a series of tape markers on the pole, Tama was responsible for telling them to speed up or slow down. With every ounce of their attention focused on the task, even the team's breathing would sync up during the 60 seconds, she said.

In performing this ritual year after year, Tama sees an intrinsic link between the countdown, which she calls "a minute outside of time," and the making of New Year's resolutions.