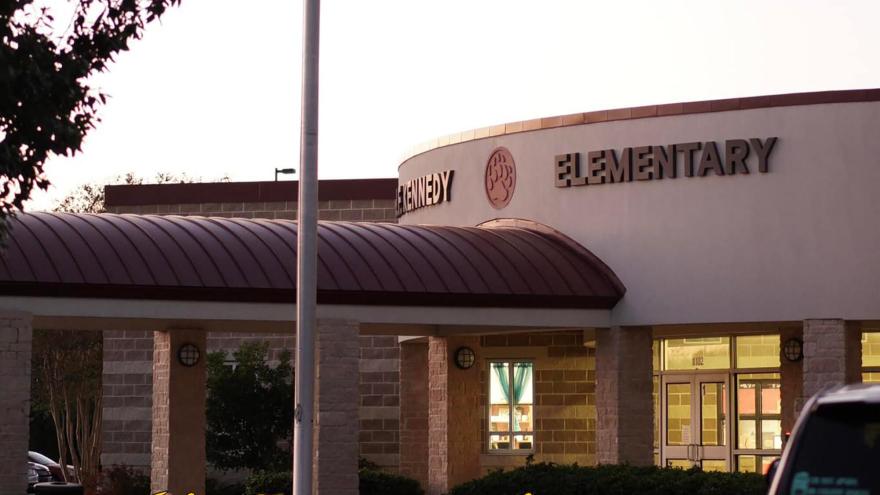 The school was locked down after the 4-year-old student was found with a gun on August 31.

(CNN) -- A 4-year-old took a loaded handgun Wednesday to his South Texas elementary school, and his father has been arrested after the incident prompted a lockdown, officials said.

School administrators at John F. Kennedy Elementary School in Corpus Christi learned a student had a weapon on campus around 9 a.m., according to a letter sent to parents from West Oso Independent School District Superintendent Conrado Garcia.

The school went on lockdown immediately, and a Corpus Christi police officer on campus took the weapon and secured it, the letter detailed. The handgun was loaded, Corpus Christi Police Department said in a news release. Police and school officials did not say how the weapon was first discovered.

The incident comes as a new school year ramps up across much of the United States, with parents, students and public officials wary over the mass shooting that left 19 fourth-graders and two teachers dead in May in Uvalde, Texas.

In Arizona this week, a second-grader was found with two guns and ammunition at Cochise Elementary School, the sheriff's office there said in a Facebook post. The child's parents were called and a juvenile referral made with charges of misconduct with a weapon and minor in possession of a firearm, according to the sheriff's office.

In the Corpus Christi case, investigators determined the gun belonged to the student's parents, and police arrested the student's 30-year-old father, who has been charged with making a firearm accessible to a child and abandoning or endangering a child, they said. Conviction on the latter charge carries up to two years in prison, police said.

The father was booked Wednesday evening into the Nueces County Jail, and bond information wasn't immediately available, according to the jail. CNN couldn't immediately determine if he has a lawyer.

"While we do not believe that students and staff were in any kind of imminent danger, as a precaution the campus had increased police presence and maintained a higher level of security at the school until the Corpus Christi Police Department gave us an 'all clear' at 10:30 am," Garcia wrote to parents.

District administrators and the superintendent "responded immediately and arrived on campus to assist with monitoring this lockdown," Garcia wrote in the letter.

Corpus Christi police urged gun owners to ensure their weapons are properly secured and the check them frequently.

"We recommend that all guns are unloaded, trigger locked, and in a locked gun safe, or pistol box with the ammunition locked away separately," police said in a news release. "Keys for the guns and ammunition should be located out of reach of children, away from the weapons and ammunition."