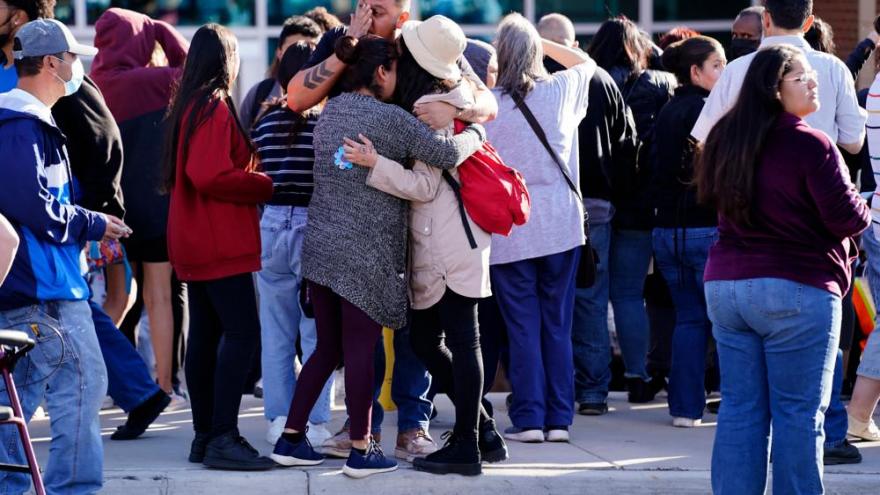 Parents reunite with their children outside of Hinkley High School in Aurora, Colorado, on November 19.

(CNN) -- Two teens were arrested over the weekend in connection with a shooting that wounded three teenagers during a fight in the parking lot of a Colorado high school Friday, authorities said Sunday.

"All three that have been arrested are 16-year-old males. Because of this, their names will not be released," police announced in a written statement Sunday night. All three are being held on attempted first degree murder.

The shooting happened around noon Friday in the parking lot of Hinkley High School in Aurora, police said, adding that two of the victims are 17 years old while the third is 16.

A motive has not been revealed in the case, but Aurora Police say they believe more people were involved.

On Monday afternoon, six Aurora Central High School students were shot at a nearby park. The police department is investigating whether the two shootings are related, Aurora Police Chief Vanessa Wilson said.

In Friday's shooting, an officer with Aurora Public Schools fired back at the shooter before police arrived on the scene, Wilson said.

Two of the victims shot Friday are Hinkley students, and the third is a student at APS Avenues school. None of the injuries were life-threatening, Wilson said.

The shooting at Hinkley high sent the school under lockdown, police said.

Aurora police also said there had been social media threats to Gateway and Grandview high schools in Aurora, and officers were sent to those schools as a precaution.