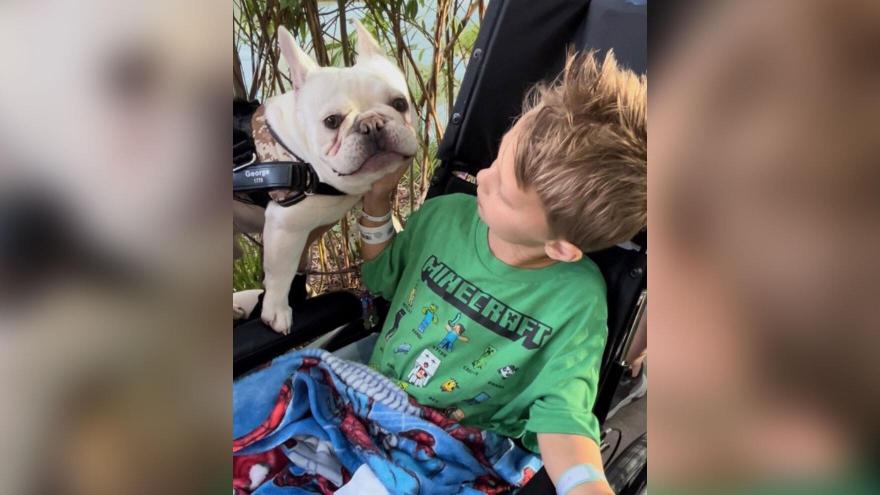 Cooper Roberts, the 8-year-old boy left paralyzed in the 4th of July parade mass shooting in Highland Park, Illinois, has been transferred to a rehabilitation facility after almost a month in pediatric intensive care, according to family spokesman Anthony Loizzi.

(CNN) -- Cooper Roberts, the 8-year-old boy left paralyzed in the 4th of July parade mass shooting in Highland Park, Illinois, has been transferred to a rehabilitation facility after almost a month in pediatric intensive care, according to family spokesman Anthony Loizzi.

The medical team at the rehab facility, Shirley Ryan AbilityLab, will conduct a series of assessments to determine appropriate physical and occupational therapy, as well as other rehab and mental health services, to support Cooper in regaining his strength and "reaching his maximum potential moving forward," Loizzi said.

His family said Cooper is now eating solid food and was also able to visit with his dog, George. The family also provided several photos of Cooper and George together, with the boy wearing a Minecraft shirt and a Spider-Man blanket.

Cooper attended the annual parade with his parents and twin brother when he was shot by a 21-year-old man perched on the roof of a building who opened fire at paradegoers, killing seven people. The gunman used a semi-automatic rifle that he was able to purchase legally despite previous threats of violence that required police intervention.

The bullet caused several significant injuries for Cooper, including a severed spinal cord, and left him paralyzed from the waist down, the family said.

Days after the shooting, after regaining consciousness and being removed from a ventilator, Cooper asked to see his twin brother Luke and his dog. Luke also suffered injuries from shrapnel and was treated and released from the hospital last month.

Cooper has spent the last month recovering at Comer Children's Hospital in Chicago.

"Cooper was shot in the back and the bullet exited his chest, which did significant damage throughout his body, including to his aorta, liver, esophagus, and spinal cord," she said. "It is our hope that with Cooper's continued progress and with the continued prayers and support he is receiving from everyone; he will soon be able to be transferred to Shirley Ryan Ability Lab."

Roberts herself had bullet wounds to two parts of her leg and has had multiple procedures on her foot, she said. She asked the public to keep Cooper and his twin brother in their thoughts.

"Please keep following along and praying for Cooper and for Luke. They are good, sweet boys who love everyone and want good for everyone they know," Roberts said. "They believe in the best in people and in the world. Their lives are so much more and better than this terrible thing than was done to them. Their lives are not a tragedy, they are a triumph."