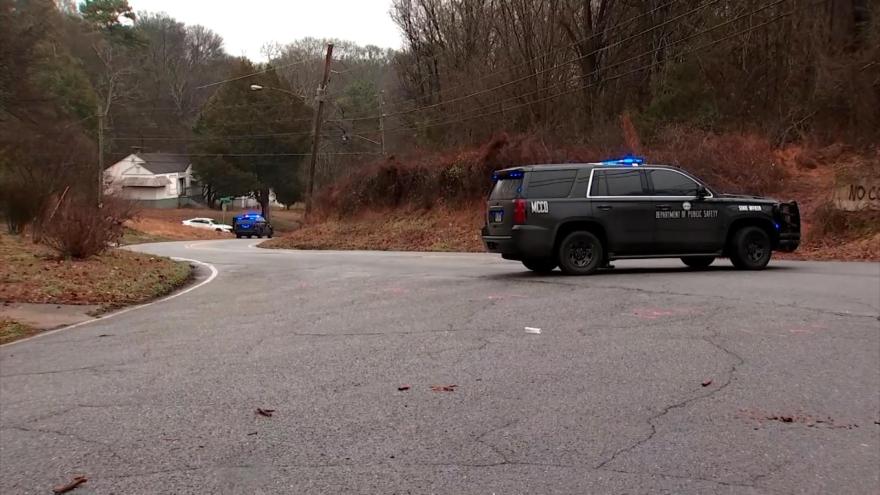 (CNN) -- Seven people were arrested and charged with domestic terrorism following the fatal shooting of one person and the shooting of a Georgia state trooper near a proposed Atlanta police training facility, according to the Georgia Bureau of Investigation.

Opponents of the project -- a $90 million, 85-acre planned facility dubbed "Cop City" by activists -- had been camped out for months in the forest in an attempt to stop construction. When law enforcement began an operation to remove people from the area Wednesday morning, gunfire was exchanged, GBI Director Mike Register said.

Law enforcement and opponents of the project have given differing details on what happened, with Register saying law enforcement personnel "returned fire in self-defense," after someone "without warning shot a Georgia State Patrol Trooper."

"The individual who fired upon law enforcement and shot the trooper was killed in an exchange of gunfire," Register said.

In a later news release, the GBI said officers "located a man inside a tent in the woods" at about 9 a.m.

"Officers gave verbal commands to the man who did not comply and shot a Georgia State Patrol Trooper. Other law enforcement officers returned fire, hitting the man. Law enforcement evacuated the Trooper to a safe area," the updated release said.

Kei Diliza, a resident of nearby Gresham Park who is affiliated with the local movement "Stop Cop City," told CNN on Wednesday that reports from other members who were near the site conflicted the account that law enforcement gave regarding a protester shooting at them.

"Community members have been demanding police end brutal tactics against forest defenders for months. Just on Monday, over one hundred neighbors and organizers gathered at the DeKalb County Courthouse to demand an end to police repression of the movement to stop cop city," the statement said.

Some 25 campsites were removed from the site during the clearing operation, the agency said in a release. Weapons including "mortar style fireworks, multiple edged weapons, pellet rifles, gas masks, and a blow torch" were recovered.

The seven arrested were all from states other than Georgia.

The proposed facility has been the site of violent incidents in the past. Five people were arrested last year and charged with domestic terrorism after activists and protestors clashed over development of the site.

In May, eight protesters were arrested after a Molotov cocktail was thrown at police as authorities tried to remove them from the area, according to CNN affiliate WSB. And last month, five people were arrested and charged with domestic terrorism after police tried to remove barricades at the entrances to the area.

The Atlanta Police Foundation has said the center is needed to help boost morale and recruitment efforts, and previous facilities used by law enforcement are substandard.

The facility will include a shooting range, mock city and burn building.

Some opponents see it as a response to the 2020 protests sparked by the deaths of Black people while in police custody, while others have concerns about the project's environmental impact and some say the project, which will cost taxpayers about $30 million, has been a largely secretive development with scarce community input.

In Wednesday's news conference, Register said that amid nationwide conversations about reforming police forces, building a new center that would "train police officers to be effective in engaging in the community is a great thing for the community."

The person who died Wednesday has been identified as Manuel Esteban Paez Teran, 26, according to the GBI.

Activists associated with a group protesting the site said Teran was a "Forest Defender," working to fight environmental racism. Local justice groups released a joint statement saying Teran, known as Tortuguita and who identifies as nonbinary, was a "sweet, warm, very smart and caring" person.

The man died on scene, according to the release. A handgun and shell casings were recovered from the scene, the GBI said.

The wounded trooper was transported to Grady Memorial Hospital for treatment, and according to the Georgia Department of Public Safety, was in stable condition Thursday.