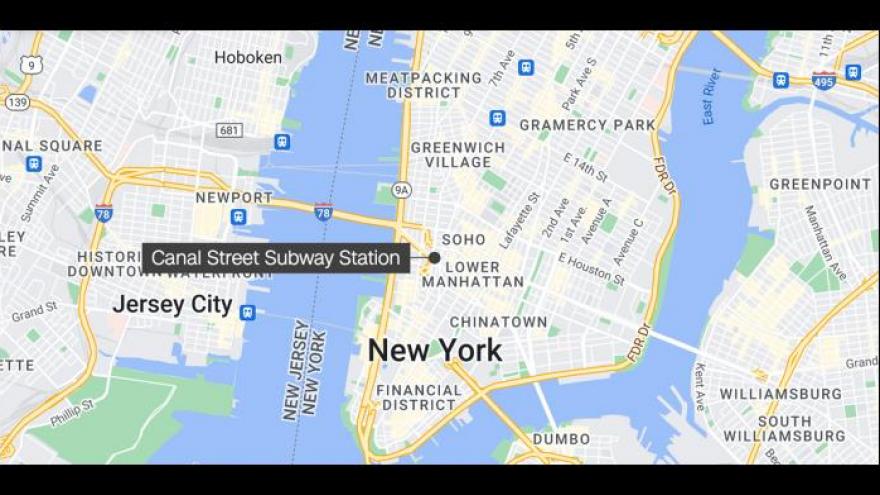 The victim was seated in the last car of a Manhattan-bound "Q" line train, NYPD Chief of Department Kenneth Corey said at a press conference.

(CNN) -- The suspect in the fatal shooting on a New York City subway over the weekend is in custody, according to a tweet from the New York Police Department.

"Today the manhunt for Andrew Abdullah is over. Less than three hours after the NYPD released his photograph to the public, Mr. Abdullah knew he had nowhere left to run," NYPD Commissioner Keechant Sewell said.

Police spoke to Abdullah moments after the shooting Sunday, but he had changed clothes and didn't match their description, so they let him go, police said.

Police stopped Abdullah about a block and a half away from the subway, about 11 minutes after the shooting, asked him what he was doing and also saw his identification, Chief of Detectives James Essig said. Officers were satisfied with his answers, Essig said, and they let him go.

Abdullah had a different shirt on and a now had a backpack, Essig said, but later, police reviewed surveillance video and saw him changing clothes and were able to identify him because they had seen his identification.

Suspect had eight prior arrests

Abdullah has at least eight prior arrests, including an assault in 2016, an assault in 2017 and a gang takedown in May 2017 where he was charged with attempted murder, robbery and conspiracy in the first degree, Essig said. He received a 30-month sentence and two years post release supervision, Essig added. He was out on parole on June 11, 2019, and on parole until June 2021 but was also arrested for several other crimes in 2021.

Abdullah allegedly gave the gun used in the shooting to a homeless man as he excited the subway, but the gun has been recovered and matches the 9 mm casing from the scene of the shooting, Essig said. The gun was stolen from Hampton, Virginia in November 2019, Essig said. When detectives spoke with the person who received the weapon, he told authorities he didn't know who gave it to him, the source said.

"The most basic purpose of the criminal justice system is to keep people safe," New York Police Commissioner Keechant Sewell said. "And in the only state in our nation where a judge is not allowed to consider dangerousness when setting bail, this was yet another failure of that system."

"The murder of Daniel Enriquez was every New Yorkers worst nightmare. Tragically, it's a scenario we've seen play out far too many times before," Sewell added. "This horrific crime should never have happened."

New York City Mayor Eric Adams was asked where the failure and breakdown of the system occurred.

"The attempted murder, he got 30 months, he shot someone," Adams said. "So, he failed the first time, he murdered someone this time. That's the breakdown."

The Legal Aid Society said in a statement Tuesday Abdullah was "needlessly ambushed" by police before he could voluntarily surrender and was also denied of his opportunity to consult with counsel.

"Since last night, we have been actively speaking with the New York Police Department and the New York County District Attorney's Office to negotiate his surrender, and what transpired today was completely inappropriate and unwarranted given those conversations," read the statement from the law firm representing low-income families and individuals.

"We have been assigned to represent Mr. Abdullah on this case. He is presumed innocent and entitled to counsel and a robust defense. At this preliminary moment in the case, we caution New Yorkers from rushing to judgment, as we are just beginning our investigation and reviewing evidence. Mr. Abdullah deserves vigorous representation from his defense counsel and that is what The legal Aid Society will provide," the statement read.

Daniel Enriquez, a 48-year-old Goldman Sachs employee from Brooklyn, was fatally shot in the chest as he sat in the last car of the Manhattan-bound train traveling on the Manhattan Bridge on Sunday, officials said.

MTA CEO Janno Lieber again spoke about the burgeoning crime problem on New York City subways and the importance of making them safe.

"Over time, I believe that we will help with the mayor and the police commissioner's strategy to restore riders' sense of safety which has been so harmed and so eroded by this terrible incident and to restore confidence in the safety of the mass transit system."

New York's business leaders are set to meet with New York City Mayor Eric Adams Thursday to address the uptick in subway crime they say is hampering the city's economic recovery, according to the Partnership for New York City.

"Corporate leaders look forward to sharing these employee concerns with the Mayor on Thursday and finding out how they can support his efforts to restore confidence in the safety of the city," said Kathryn Wylde, President and CEO of the Partnership for New York City.

The subway has been the setting for a series of disturbing crimes in recent months, rattling the public's confidence in the safety of the transit system.

In January, 40-year-old Deloitte employee Michelle Alyssa Go was fatally pushed in front of an oncoming subway train. And last month, a man set off a smoke device and opened fire on an N line subway train in Brooklyn, injuring more than two dozen people. The suspect in that case, Frank James, fled the scene and was captured a day later after police released his name and image to the public.

Mayor Eric Adams, a former transit police and NYPD officer, has increased the number of officers on the subways and released a plan to address homelessness on the transit system. He has pushed for workers to repopulate offices largely left empty by the pandemic, and he acknowledged Monday Enriquez's death hurts the effort.

"This is the type of employee I want to get back to work," Adams said. "Does this send a chilling impact on that? Yes."

Witnesses to the shooting told NYPD investigators the suspect was walking back and forth in the same train car and "without provocation, pulled out a gun and fired it at Enriquez at close range as the train was crossing the Manhattan bridge," said NYPD Chief of Department Kenneth Corey.

The shooter and the victim had no interaction on the train before the shooting, and it appeared there was no dispute, a law enforcement official with knowledge of the investigation told CNN. While there were other people in the train car, Enriquez was the only person who was injured, said Corey.

When the doors opened at Canal Street, the shooter ran out of the subway car and out of the station and remains at large, the official said.

Officers responded at about 11:42 a.m. and found Enriquez with a gunshot wound to his torso. First responders rendered aid and transported him to Bellevue Hospital, where he died of his injuries, Corey said.

Enriquez had worked for investment bank Goldman Sachs for nearly a decade since joining its Global Investment Research division in 2013, the company said.

"Daniel Enriquez was a dedicated and beloved member of the Goldman Sachs family for nine years," Goldman Sachs Chairman and CEO David Solomon said in a statement. "He worked diligently to support our Macro Research team in New York and epitomized our culture of collaboration and excellence."

"We are devastated by this senseless tragedy and our deepest sympathies are with Dan's family at this difficult time."

Mayor Adams said the city is working to crack down on guns on the transit system, including by using technology -- "not metal detectors," he clarified -- to track guns on subways and by implementing checkpoints for buses.

"I use the subways a lot, I am in the system a lot, and it's unimaginable. You are sitting down going to brunch, going to visit a family member, a person walks up to you and shoots you for no reason," he said. "That is the worst nightmare and that is why I have been so dogmatic about one, getting illegal guns off the street, then getting the shooters."