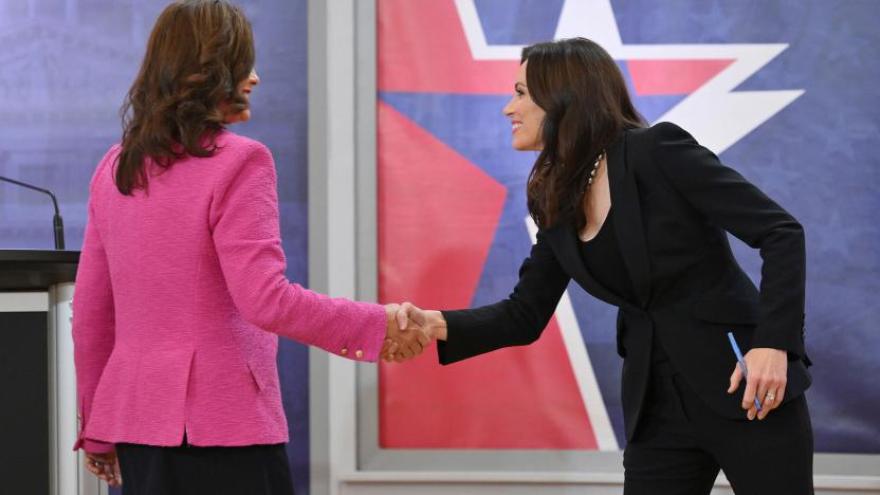 (CNN) -- Michigan Democratic Gov. Gretchen Whitmer and her Republican challenger Tudor Dixon clashed on abortion rights in a debate Tuesday night, as Whitmer backed a referendum on ballots this fall that would amend the state constitution to guarantee abortion rights.

Dixon said that referendum, if approved by voters, "would be the most radical abortion law in the entire country. The only place that has something similar is China and North Korea."

Whitmer shot back: "None of what she said is true."

The two were clashing over what's known as Proposal 3 -- a measure placed on the ballot after a petition drive seeking to amend the state's constitution to scrap Michigan's 1931 law banning abortion with no exceptions for cases of rape and incest. That law, which had long been dormant, was revived after the Supreme Court's decision overturning Roe v. Wade before a judge ruled the law unconstitutional in September.

Tuesday's debate was the second between Whitmer and Dixon, with voting already underway in the key swing state two weeks from Election Day.

Whitmer's campaign has focused largely on her support for abortion rights. In the wake of the US Supreme Court overturning Roe v. Wade, Whitmer sued to block the enforcement of the state's 1931 abortion ban, and she has backed Proposal 3.

Dixon, a conservative commentator who is backed by former Education Secretary Betsy DeVos' family and won the GOP nomination after an endorsement from former President Donald Trump, has criticized Whitmer's pandemic policies. She has also leaned into cultural battles, proposing a policy that would ban transgender girls from competing in sports with the gender they identify with, as well as one modeled after the controversial measure Florida GOP Gov. Ron DeSantis signed into law earlier this year, which critics dubbed the "Don't Say Gay" law.

Here are four takeaways from their debate:

Their exchange over Proposal 3 underscored the drastically diverging views of what the ballot measure would do if approved by voters. Supporters have said it would not invalidate existing laws, including parental consent requirements. Opponents say it would nullify virtually all existing guardrails.

"We know that Proposal 3 does remove parental consent. It also makes it so you don't have to be a doctor to perform an abortion," Dixon said.

She argued that if approved, the ballot measure would allow for abortions "up to the moment of birth, for any reason, including sex selection."

The Democratic governor said Michigan's laws regulating abortion rights that existed prior to Roe v. Wade's reversal would remain in place. She also pointed to Dixon's comments opposing abortion rights in cases of rape and incest.

"You cannot trust her on this issue. If you want to protect Roe v. Wade rights, vote yes on 3," Whitmer said.

The exchange showcased Dixon's shifting approach to the issue, as she seeks to motivate conservative voters. Dixon had previously downplayed the role of the governor in the abortion battle, arguing that the issue's outcome will be settled by voters and that those voters could cast their ballots to guarantee abortion rights and back Dixon at the same time.

She said Tuesday night that she would accept voters' will if they approve Proposal 3.

"The people will decide what they want to do on abortion rights in the state of Michigan," Dixon said.

Whitmer and Dixon each took shots at each other over past election results, but did not dive in any detail into the issue of how elections are managed in one of the most important presidential battleground states.

The Democratic governor hit her Republican challenger first, noting that she has at times embraced false theories about widespread fraud in the 2020 election.

"She refuses to accept the outcome of the last election," Whitmer said. "She is an election denier and never, ever has said that Joe Biden won this last election."

Dixon responded with a criticism of Whitmer's lieutenant governor, Garlin Gilchrist, citing his complaints about Detroit Clerk Janice Winfrey in 2017, when Gilchrist ran against Winfrey for the post managing the city's elections and narrowly lost.

"I'm wondering if she's going to say that she can no longer run with an election denier," Dixon said.

It's a strategy Republicans have used increasingly in recent weeks, responding to Democratic criticism that they have parroted Trump's election lies by pointing to examples of Democratic politicians, such as Georgia gubernatorial nominee Stacey Abrams, rejecting the outcomes of past elections.

Ultimately, the two talked past each other: Neither engaged with the other's criticism, and moderators did not return to the issue.

The two clashed over how to protect children from school shootings, with Dixon arguing for more security at school buildings and Whitmer making the case for gun control measures.

Dixon said she wants armed security at schools, as well as a single entry point for school buildings.

"We need an Office of Safe Schools, like states like Florida have, to make sure that this is a top priority," Dixon said.

"We've been trying that for 30 years. It's not working," Whitmer said.

Instead, she said, Michigan needs to enact laws requiring background checks and secure storage, as well as "red flag" laws.

"Ask yourself, who is going to keep your kids safe: The former prosecutor with plans, or a candidate with thoughts and prayers?" Whitmer said.

Dixon sought to go on offense over local debates around what books are allowed in school libraries, saying that "parents are outraged" over what she characterized as "books describing how to have sex."

"If you have material in your school that is something you can't read to a child at a bus stop because you would be arrested because it is pornographic, then it should not be in a classroom," Dixon said.

Whitmer responded that Dixon was trying to "wedge communities against each other."

"It is dangerous and it is selfish," she said. "We need to bring down the temperature and solve the problem to make sure parents are involved and students feel comfortable and we're giving them a robust education."

Dixon responded: "We've received the answer now that she's not going to stand with parents on this issue."