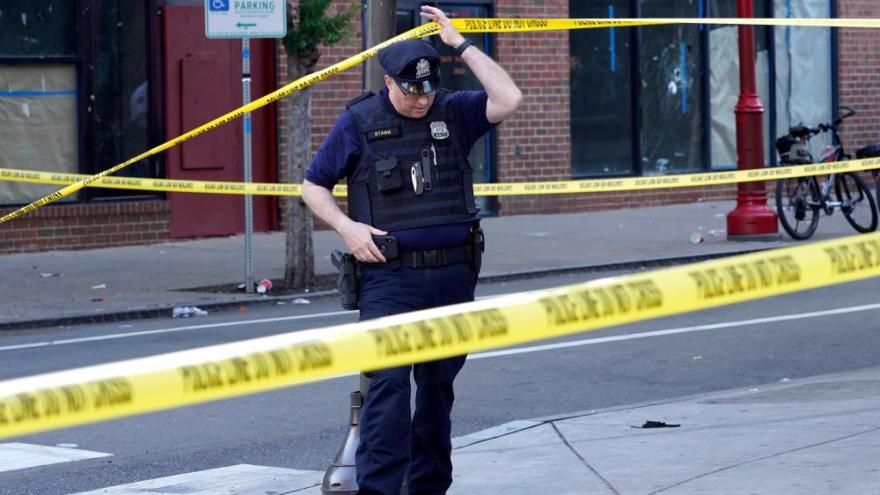 Officials are urging witnesses to come forward as they search for the shooters who fired into a Philadelphia crowd, leaving 3 dead and 11 wounded.

(CNN) -- A night of revelry on Philadelphia's South Street turned chaotic Saturday as gunmen opened fire into a crowd, leaving two people and a suspect dead and 11 wounded in one of at least 13 weekend mass shootings across the United States.

One of the suspected gunmen is among the three people killed, Philadelphia police said Monday. One suspect has been charged with multiple offenses, including two counts of aggravated assault, according to Philadelphia District Attorney's Chief of Homicide Joanne Pescatore.

A second individual wanted in connection with the shooting was taken into custody by the US Marshals Service, Philadelphia District Attorney Larry Krasner told CNN Monday night. Officials from the district attorney's office earlier stated that the individual would face charges of attempted murder, assault and tampering with evidence, among others.

That suspect stayed at the scene to render aid to one of the men who later died, and while there provided "all his information to police," Philadelphia District Attorney's Chief of Homicide Joanne Pescatore said.

Neither are facing murder charges at this time. CNN has reached out to the district attorney's office for further information.

Hundreds were "just enjoying South Street, as they do every single weekend, when this shooting broke out," Philadelphia Police Inspector D.F. Pace said.

Police are urging witnesses to come forward, offering a $20,000 reward for information leading to an arrest.

Gun violence also marred the weekend in Chattanooga, Tennessee -- where a shooting and its aftermath left three dead and 14 injured -- and in attacks in Summerton, South Carolina, and Phoenix that each left one dead and at least seven wounded. Those incidents followed other mass shootings that have stunned the nation, including at a supermarket in New York; an elementary school in Texas; and a hospital in Oklahoma.

At least 246 mass shootings have been recorded in America this year, according to Gun Violence Archive, which like CNN defines a mass shooting as one in which four or more people are shot, not including the shooter. In that deadly wake, the US Senate gears up again this week to debate how to address the problem.

Here's what we know about the shooting that erupted in Philadelphia's popular entertainment district:

How the shooting unfolded

The shooting started after an argument on the street, according to video surveillance, Pescatore said. A fight ensued, and one of the men involved, Gregory Jackson, was killed after exchanging gunfire with another man, she said. Both had licenses to carry a gun.

One of the men allegedly fired toward the group, then turned toward police who were now on scene, Pescatore said.

Police returned fire, striking the suspect in the hand. He then fled to another location where police were responding to an earlier shooting, approaching police and yelling, "'He shot my hand off, he shot my hand off,'" Pescatore said.

He was taken to a hospital by police, she said.

The officers "observed several civilians suffering from gunshot wounds, lying on the sidewalk and in the street," Philadelphia Police Commissioner Danielle Outlaw said Sunday at a news conference.

Five guns were fired in the melee, police said, and two handguns were recovered at the scene. One of the guns police found had an extended magazine, Pace said.

According to prosecutors, three were 9 mm guns and one was a .40 caliber.

State and federal authorities are helping Philadelphia police with the investigation, Outlaw said.

"This started out as a fistfight and two out of those three (suspects) were licensed to carry a firearm," Krasner told CNN's Laura Coates Monday night. "The genesis of this terrible mass shooting was not about illegal weapons. The genesis of this mass shooting was about everybody has a weapon and so fistfights that, in my day, would have resulted in a broken nose, or maybe at most a broken jaw, turned into absolute mayhem on the streets."

Who was struck by bullets

Police identified those who died as Gregory Jackson, 34; Alexis Quinn, 27; and Kristopher Minners, an educator who was celebrating his 22nd birthday with family and friends.

Minners worked with 2nd and 6th grade students at Girard College, a boarding school which educates students from families with limited financial resources, according to its website.

"He was doing an amazing job for us" and was named resident adviser of the month in March, the school said in a statement. "Kris was a vital member of our community, and his loss will be felt deeply."

One of the 11 people injured was in critical condition Sunday evening, the police department said in a news release.

How officials are responding

The shooting marked "a dark day for Philadelphia," the police commissioner said. "While many of us were out enjoying the beautiful day in the city, a horrendous and unthinkable act happened in a very popular local and tourist hangout."

There was an increased presence of uniformed officers Saturday on the streets of Philadelphia, Outlaw said, due to several scheduled events. There were even more officers deployed Sunday evening, officials said.

A curfew was implemented in part of downtown Philadelphia from 8 p.m. Sunday until 6 a.m. Monday, the mayor's office said, citing "patterns of recent violence in the area and ongoing safety concerns." The order barred all pedestrian and vehicular traffic with exceptions only for residents, local property owners and employees, licensed medical personnel, members of the media and law enforcement.

"Once again, we see lives senselessly lost and those injured in yet another horrendous, brazen and despicable act of gun violence," Philadelphia Mayor Jim Kenney said Sunday, noting it left him "not just heartbroken, but angry."

"I will continue to fight to protect our communities and urge others to advocate for stronger laws that keep guns out of the hands of violent individuals," he said.

Legislators accepting money from the gun lobby should not be in office, Krasner said.

"I don't care whether they are Republican or Democrat. They belong out. They may have sold their souls to make this the most heavily-armed society in the world, but that does not entitle them to remain in office," Krasner said.