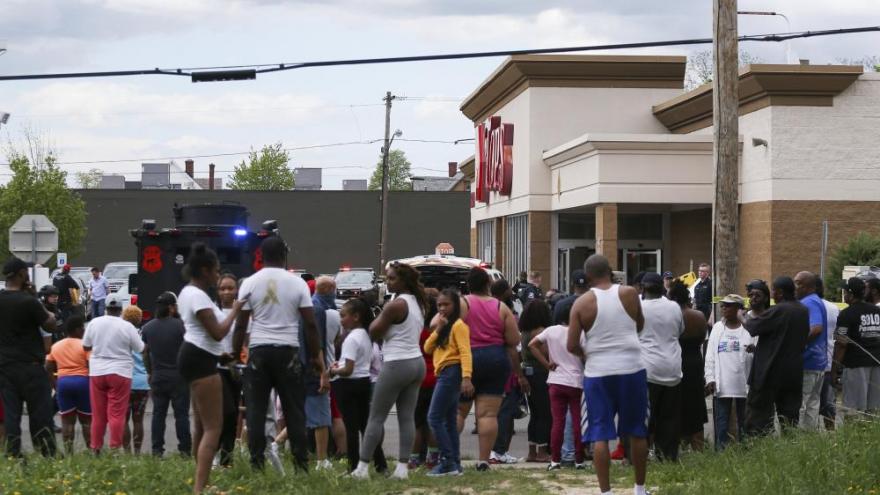 People gather as police investigate the mass shooting at a Buffalo supermarket.

(CNN) -- Ten people were killed in a racially motivated mass shooting at a supermarket in Buffalo on Saturday by a suspect in tactical gear who was livestreaming the attack, law enforcement officials said during a news conference.

The suspect is in custody in the shooting, which occurred Saturday afternoon at a Tops Friendly Markets store.

The shooting is being investigated as a hate crime and the FBI is assisting, said Stephen Belongia, special agent in charge of the FBI Buffalo field office, at the news conference.

Buffalo Police Commissioner Joseph Gramaglia identified the shooter as an 18-year-old White male who is not from the Buffalo area but "from hours away." Officials have so far not named him.

The suspect drove to Buffalo to the Tops market heavily armed, wearing tactical gear, and had a camera where he was livestreaming what he was doing, Gramaglia said.

He shot four people in the parking lot of the market, Gramaglia said. Three of those individuals died and one survived, Gramaglia added.

The killing spree in Buffalo is yet another entry to America's growing list of hate-fueled mass shootings.

And the violence adds to the year's growing toll of mass shootings in the United States, which stood at 197 as of Saturday afternoon, according to the Gun Violence Archive. The archive and CNN define a mass shooting as an incident in which four or more people are shot, not including the shooter.

Experts consider easy access to guns a root cause of the violence, and open-carry states lower the barrier for people to own and carry guns in public. But the spike in violence since summer 2020 has been general, across cities and states with lax and strict gun laws, with progressive and conservative prosecutors, as well as Republican and Democratic mayors and governors.

'This is our worst update'

The suspect walked into the market and began shooting at customers in the store, Gramaglia said.

A supermarket security guard, a retired Buffalo Police officer, "fired multiple shots at the suspect," but the suspect's tactical gear protected him from the officer's shots, Gramaglia said.

The suspect fatally shot the security officer and continued going through the supermarket, working toward the front of the store, where he encountered Buffalo police officers.

The suspect put his gun to his own neck, at which point two Buffalo officers talked him into dropping his gun and then took off some of his tactical gear and surrendered to police, officials said. Police arrested the suspect and transported him to Buffalo police headquarters.

"We appreciate the quick response by local law enforcement and are providing all available resources to assist authorities in the ongoing investigation," the statement said.