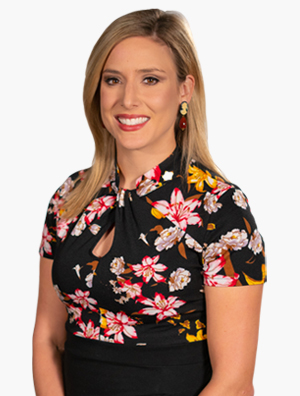 Breanne comes to ABC 57 with experience working all over the Midwest. She will be partnering on the evening newscasts with Brian Conybeare.

Most recently, Breanne was working in Detroit as the weekend anchor at WXYZ, where she covered crime, social issues, infrastructure, the auto industry and local politics in the Metro area.

Breanne started working in TV news at KOMU, during her time at the University of Missouri. Her first job was in Quincy, IL at WGEM, then to Cedar Rapids at KWWL, then KJRH in Tulsa, and then WXYZ in Detroit. She won an Emmy award for the lead story in a program on bullying during her time at KJRH and she’s also received an various SPJ and AP awards for stories and investigative pieces.

Breanne’s covered every kind of natural disaster including record breaking tornadoes in Moore, Joplin and Tuscaloosa. As well as wildfires, earthquakes, record flooding, blizzards and more. She’s covered important political figures during the 2008 Iowa caucus season and historic moments including, when President Barack Obama announced his run for the White House in 2007.

When she’s not at work, she’s a dedicated equestrian. She has an OTTB (off track Thoroughbred) she’s retrained to become a sport horse. The pair competes in eventing. It’s known as the horse triathlon, with dressage, cross country jumping and stadium jumping. She and her horse, Dread Pirate Robby have competed in Texas, Louisiana, Oklahoma, Michigan and Kentucky.

Robby is moving with Breanne to the South Bend area, along with her two cats, Jack and Finnegan.